Have You Committed an Offense(s) Against the Laws of Writing?

If your story is good enough (I don't necessarily mean the writing, I mean the STORY), then it will eventually find a home in the heart of an agent and/or publisher. And that is because it is ALWAYS about story. Simple: Good stories sell. But your proposal (ms.) is also about the writing. You must exhibit enough writing talent and skill to convince those same agents and editors that you are capable of both constructing a novel and revising, the latter a very likely requirement.

I've heard so much in workshops and author presentations about the "do's and don'ts" of writing for publication, that it's often hard to focus on the most serious 'red flags' in a body of work. Let's take a look at five (5) examples of writing offenses/violations that are sure to relegate your project to the dust bin. They aren't in any order of importance. If you have a penchant for one, you might as well commit them all.

I have such a cheery manner, don't I? Hey, it was born in the pile of rejection letters and slips I received for my writing, particularly in the early stages of submitting to agents. That's right, to agents. I was determined to follow the time-honored path: Get an agent, then let that individual (agency) find me a publisher. Well, that's another story...So, back to the big (worst) five, based on my experience. Oh, and I'd love your comments and other feedback. Keep it clean!

1. Telling, not showing. Here's an example: Shawn walked around the park a few times and decided to sit on the bench to rest.
It sounds fine? Might I suggest this as stronger writing: Shawn paced about the park's magnolia-lined pathways. He spotted a bench in the shade of an elm, back in the quiet. It looked so comfortable after all the walking. A few more trudges and he was there.

2. Shifting POV without signaling. This is sometimes called head hopping. Incorporating multiple POV can be unsettling to the reader. There are two things to consider: Transition and intimacy. Transition; referring to hints or proper setup, i.e. warning the reader that a major shift in POV is about to occur. Without handling this deftly, the writer forces the reader to re-read paragraphs for clarification. This is very distracting, if not downright jarring! Intimacy; referring to a reader's need to know and empathize with characters, and a writer's mistake in spending just brief periods of time with several different characters, rather than long periods of time with one character. Result: Readers knowing several characters slightly, rather than one character intimately.

3. Overuse of adverbs, adjectives. Use just enough to let readers get a picture of your scene. Too many, and you insult their intelligence, as well as, rob them of the imagination factor that adds necessary freedom and satisfaction to the act of reading. Read some Hemingway or Twain for sparseness of both. Read P. G. Wodehouse for adjectives used masterfully.

4. Starting a novel/chapter/scene with anything other than action. That's action, action, action. Begin the above in the middle of the action. Don't tell the reader what's about to happen, surprise them! Immerse them in it! Make them feel like they're in the scene with the character(s). An example: Whuuump. The hay bale struck Tom squarely on the head. His neck snapped and he collapsed under the weight of it, face down onto the concrete floor. Blood spurted crimson red, awash with fragments of tooth and bits of chewing tobacco. A deep-throated cackle came from the shadowy loft above.
See what I mean? :-)

5. Disregarding your protagonist's journey in structuring your plot. You cannot lose sight of the underlying reasons for what drives your character. Fears, joys, resentments, jealousies, needs, flaws, etc. It is important to come back to these within the context of your story scenes, as reminders (I call them justifiers). Like everything else in writing though, don't overdo it. More in the beginning, fewer as the story progresses. Your novel's main character requires arc--Take him/her to the depths, before bringing them back. Build empathy in this way, remembering to maintain consistency. Keep the journey real!

Okay, there you have five that really matter. Tell me about others that are critical to writing success. Bring examples, too. I like to be able to visualize what you see as important. And above all else, never stop writing. Not for a second. Well, um, that's probably not feasible...So, how about an hour a day? Thanks for stopping by! 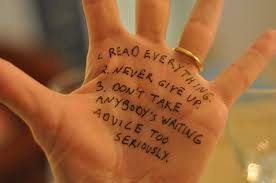 Posted by desertdogwriter at 4:45 PM