Total escape!
'Here the way was through utter darkness. The stream was narrow--so narrow that in the blackness I was constantly bumping first one rocky wall and then another as the river wound hither and thither along its flinty bed. 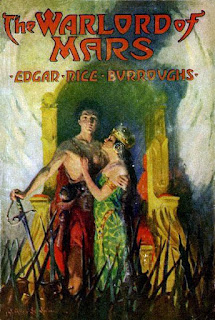 Far ahead I presently heard a deep and sullen roar which increased in volume as I advanced, and then broke upon my ears with all the intensity of its mad fury as I swung round a sharp curve into a dimly lighted stretch of water.'

This amazing adventure story was published by A.C. McClurg, Chicago, the same year that my father was born! And it was my father who first introduced me to the novels of this greatest of science fiction/adventure writers. The first Burroughs novel I owned (and it's still in my bookcase) I received for my 10th birthday: 'Tarzan and the Jewels of Opar.'

Burroughs's descriptive passages resonate with me as much today as they ever did. Any writer wishing to work in the adventure genre needs to read Burroughs--pretty much any of his collective works will do.